The WII Herbarium was established in 1986 with a view to create a facility for identification of plant specimens collected from the field by the faculty, researchers and students of WII. The Herbarium has grown considerably since then with added WII Campus,Chandrabani,Dehradun.mandate of developing a computerized database on the plants of conservation value as well as flora of different protected areas in the country. 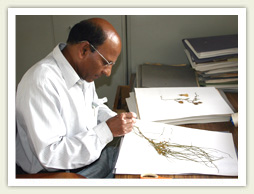 At present WII Herbarium houses the specimens of vascular plants from various wildlife sanctuaries and national parks. There are about 15,000 specimens for ready reference, which represent 158 families of dicots, 24 families of monocots, 7 families of Gymnosperms and 28 fern families. Specimens in the Herbarium are arranged according to the Bentham and Hooker's System of classification. The present strength of the Herbarium staff includes one Scientist-SF, one Technician, one Assistant and an attendant.

Based on the floristic surveys and inventory of species, database on the flora of the following areas has been prepared in collaboration with other WII's investigators: