Available evidence and the decisions adopted by Parties to the Convention on Biological Diversity (CBD) indicate that a significant gap remains in finance for biodiversity management, for countries to drastically scale up their efforts and achieve the 20 Aichi Targets defined in the CBD’s Strategic Plan for 2011-2020. A preliminary assessment conducted under the auspices of the High Level Panel on Global Assessment of Resources for Implementing the CBD Strategic Plan for 2011-2020, estimated that the global investment required amounts to between 130 and 440 billion US$ annually.

In this context, UNDP in October 2012 launched the Biodiversity Finance Initiative – BIOFIN, as a new global partnership seeking to address the biodiversity finance challenge in a comprehensive manner – building a sound business case for increased investment in the management of ecosystems and biodiversity, with a particular focus on the needs and transformational opportunities at the national level.

BIOFIN aims to develop a methodology for quantifying the biodiversity finance gap at national level, for improving cost-effectiveness through mainstreaming of biodiversity into national development and sectoral planning, and for developing comprehensive national resource mobilizing strategies.

BIOFIN thus hopes to provide a framework for undertaking 'bottom-up' analyses of the biodiversity finance gap and resource mobilization strategies, through a transformative process led by national stakeholders.

BIOFIN also ties in with the development of the new generation of National Biodiversity Strategies and Action Plans (NBSAPs) to identify national strategies and priority actions, since these will feed into the BIOFIN process in the pilot countries. The tools developed through BIOFIN will be applied in the 42 countries that UNDP is supporting to undertake new generation NBSAPs, and will be made available to all 193 CBD Parties through the NBSAP Forum.

India's National Biodiversity Action Plan (NBAP), formulated through a comprehensive inter-ministerial process and approved by the Union Cabinet in 2008, was developed prior to CBD's Strategic Plan for Biodiversity 2011–2020 and the Aichi Biodiversity Targets.

The broad action points in India's NBAP are generally aligned with the targets laid down by the five strategic goals of the Strategic Plan for Biodiversity 2011–2020 and the corresponding Aichi Biodiversity Targets.  Thereafter, India has developed 12 National Biodiversity Targets (NBTs) in consultation with concerned ministries/departments, using the Strategic Plan and its 20 Aichi targets as the framework, and has included these in NBAP Addendum 2014 to NBAP 2008. Implementation of BIOFIN in India would be country driven and would build on the activities already undertaken for assessing funding for biodiversity as a part of preparing NBAP Addendum 2014. 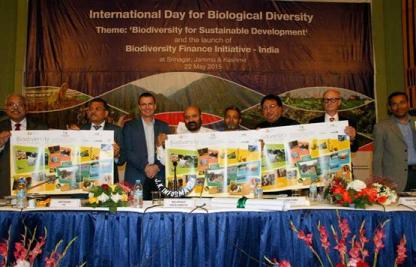 With this background, India's Ministry of Environment, Forest and Climate Change along with UNDP officially launched the BIOFIN India project at the CoP 11 to the CBD in Hyderabad, on the International Biodiversity Day, 22nd May 2015.

This collaboration is being seen as a new global partnership, seeking to address the biodiversity finance challenge faced by the world in a comprehensive manner—building a sound case for increased investment in the management of ecosystems and biodiversity.

UNDP India manages the programme under the guidance of MoEFCC. A Steering Committee and a Technical Advisory Group has been constituted for providing technical guidance.

The India Pilot and WII: 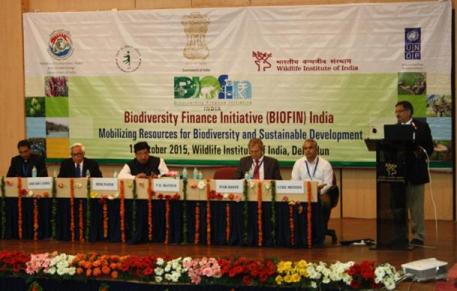 BIOFIN is being implemented at the national level and in two pilot States viz. Uttarakhand by WII and Maharashtra by NIPFP.

Methodology included in the BIOFIN workbook is being used as a guidance document, with necessary adaptation to the Indian context and all outputs will be achieved.