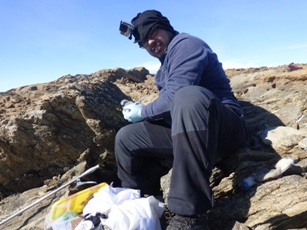 Antarctica, the ice continent, being a “Scientists Paradise” for biological, meteorological and geological research, serves as a living laboratory to measure the effects of prevailing climate change. As of date, there are 44 permanent bases of 18 countries including India in Antarctica where research in various fields is being conducted. Antarctic research has a global relevance in understanding broader physical and environmental changes as a storehouse of past records of local and global changes.

Keeping this in mind, the Scientific Committee for Antarctic Research (SCAR) was established in 1958 under the International Council of Scientific Unions - ICSU. SCAR initiates, promotes and coordinates scientific activity in the Antarctica. It mainly provides a forum for scientists of all the countries to discuss their field activities and plans, and to promote collaboration between them. Antarctic treaty came into picture in 1959 to maintain this picture of brotherhood and cooperation. The treaty entered into force in 1961. After two successful expeditions, India became a party to the treaty on 19th August, 1983 and was given consultative status soon thereafter. Since then the India has established three research stations, of which two, MAITRI and BHARATI, are currently operational.

Institutions under the Ministry of Environment, Forest and Climate Change, Government of India, such as WII, ZSI, BSI etc have been participating in the Indian Scientific Expeditions to Antarctica and contributed data related to biological science to Scientific Council of Antarctica through the National Centre for Antarctic and Ocean Research (NCAOR), Goa. NCAOR under the Ministry of Earth Science is the Nodal Organization to organize and coordinate the Indian Scientific Expeditions to Antarctica (InSEA).

Wildlife Institute of India has been participating in Indian Scientific Expeditions to Antarctica periodically since the year 1994-95. So far, WII has participated in seven Indian expeditions (14th, 15th, 16th, 28th, 29th, 33rd & 34th) to the ice continent. Seven scientists and one researcher from the institute have been on these expeditions conducting research at both MAITRI (70° 45’ S, 11° 43’ E), Indian research station at Schirmacher Oasis, Dronning Maud Land and at BHARATI (69° 24’ S, 76° 11’ E), the new Indian research station at Larsemann hills, Princess Astrid Coast.  The main aim of WII participation is for establishing baseline data and developing monitoring programme for birds and mammals of the Indian Ocean and Antarctica.  After the participation in six expeditions, WII has realised the importance of expanding its mandate in the InSEA by conducting extensive ecological studies on wildlife, their ecology, behaviour and population genetics at Indian areas of operation apart from long term monitoring of populations of birds and mammals in the region with respect to climate change.

Antarctica is at the centre stage of rapid and extreme environmental events due to prevailing global climate change, which in turn necessitates long-term monitoring to detect changes in the Antarctic species’ populations. Understanding processes that control habitat selection and identifying preferred habitat facilitates monitoring and conservation efforts. Though five species of birds viz. Snow Petrel, South Polar Skua, Wilson’s Storm Petrel, Adelie Penguin and Emperor Penguin breed/moult around the Indian research stations, very little is known about their population status in these areas.  The objective of our research is to assist conservation and management of Antarctic wildlife and focus on their status, population dynamic, threats and identify key areas of their distribution around the year. The results from the research will help us to design an integrated long-term monitoring program for selected Antarctic species in the eastern Antarctic and adjoining Southern Ocean region.

The main research questions which are being investigated at these areas are:

Currently, a three-year project Long-term Monitoring of Wildlife and its habitats in Antarctica and Southern Ocean aimed at understanding ecology of birds and mammals is ongoing in the Indian sector of operation. During the last two expeditions, extensive data on nesting ecology, behaviour and habitat of breeding seabirds has been collected in Larsemann Hills and Schirmacher oasis. This includes morphometric data obtained while tagging birds with serially numbered rings and genetic sampling to understand their population genetics. Several islands at Larsemann hills and inland Schirmacher oasis area were surveyed during the austral summer of 2013-14 to locate these breeding sites and collect habitat parameters. We established permanent nest plots in 2014-15 to monitor breeding pairs at Larsemann hills especially for Snow Petrels which nest in rock cavities.

We have initiated a program on understanding the genetic structure, dispersal rates and factors shaping evolutionary characteristics of Antarctic species through a combination of ecological and molecular methods. Bringing innovation into research, we have collaborated with Indraprastha Institute of Information Technology- Delhi to develop light-dependent resistor based sensors to understand movement of birds at these nest sites and record nest temperatures. These sensors aid in getting crucial data on at-nest movement of parents and fledglings and may help in a better understanding of breeding phenology of these species. In the future, we intend to establish camera-based monitoring to generate time series data on these nesting sites. With these improvised monitoring methods, we plan to observe any changes in breeding phenology of seabirds in relation to climate trends in Antarctica.